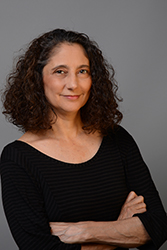 Karen is a director of the multi-award winning Physical TV Company, through which she has developed, produced, directed, or edited numerous highly acclaimed short films, online and mobile productions and two short features. Karen’s 2016 film, Woman with an Editing Bench, won the national ATOM Award for Best Short Fiction, the Australian Screen Editors' Guild (ASE) Award for Best Editing in a Short and 6 other film festival awards. Her 2018 documentary ‘After the Facts’ was also honoured with an ASE Award for Best Editing, after its screenings at the Sydney International Film Festival, the Adelaide International Film Festival, the Perth Revelation Film Festival and the Antenna Documentary Film Festival.

Karen's 2014 half hour documentary ...the dancer from the dance was a finalist for an Australian Dance Award for Outstanding Achievement in Dance on Screen, and also a finalist for an ATOM Award for Best Arts Documentary. Her recent film Digital Afterlives, made in collaboration with co-director of The Physical TV Company, Richard James Allen, has screened at over 30 international dancefilm festivals and picked up awards for editing and for innovation in U.S. dancefilm festivals.

Before joining Macquarie, Karen held the post of Head of Screen Studies at AFTRS for 6 years and was a partner investigator in the ARC/Australia Council funded investgation Games and the Wider Interactive Entertainment Industry in Australia: an inquiry into sources of Innovation.  Karen is the author of Cutting Rhythms, Intuitive Film Editing (now in its 2nd edition with Focal Press/Taylor &Francis). In addition to Cutting Rhythms, her publications include editing Performing the Unnameable; An Anthology of Australian Performance Texts (Currency Press, 1999) and she has published academic essays and articles in the International Journal of Screendance; Participations Journal of Audience Research; Metro, RealTime, The Journal of Performance Studies, Projections, Apparatus, and other anthologies and journals.

Karen's work as a professional editor includes documentary, dancefilm and drama. She was the 2009-2010 President of the Australian Screen Editors Guild and enjoys her ongoing association with the guild as a full member and frequent public speaker. Before taking up filmmaking, editing and film studies, Karen had a distinguished career as a professional dancer - performing with the Bill T. Jones/Arnie Zane Company on the Opera House stages of the world and directing two dance companies. She holds a Doctorate of Creative Arts from UTS, two MAs - one from UTS and one from AFTRS, and a BFA in dance from NYU Tisch School of the Arts.

'The Aesthetics of Mood in Cinema'

THE AGE OF THE ABORIGINAL AVATAR: reclaiming the sacred in a Virtual World

POETIC HONESTY – THE ART OF STORYTELLING IN HYBRID DOCUMENTARY

The Art of Mentoring: examining some practices of media mentorship in multicultural Australia.

Editing and Cognition: historical and contemporary editing practices and collaborations through the framework of distributed cognition theories

After the facts: These edits are my thoughts

I want to make a film about women

On rhythm in film editing

Merrily we go to hell

Short stories on the big screen