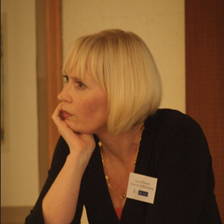 Louise's main current research area is medievalism. Medievalism examines post-medieval receptions and constructions of the Middle Ages, and considers the impact of these constructions on modern cultural, political, and social life. Her current research is on comic representations of the medieval past, trans-historical emotion, and how ideas about the medieval past have figured in modern political cultures. She has also worked extensively on the long afterlife of the Middle Ages in Australian cultural life. Her 1997 PhD thesis examined the concepts of political and literary authority in the writings of medieval women, and she maintains an interest in this area, publishing academic work on the 15thC French writer Christine de Pizan.

ENGL309 Shakespeare and the Renaissance

Board Member and Equity Officer, Australia and New Zealand Association for Medieval and Early Modern Studies

Node Director, Australian Research Council Centre of Excellence for the History of Emotions

Comic medievalism and the modern world

Music, Medievalism and the Challenges of Orientalism in Mathias Enard's Boussole

"Nothing in this world is indifferent to us": Laudato Si' as global and planetary medievalism

The crimson thread of medievalism: haematic heritage and transhistorical mood in colonial Australia

The Crusades and medievalism

So hot right now: the Middle Ages in the climate change debate

‘Medieval’ makes a comeback in modern politics: what’s going on?